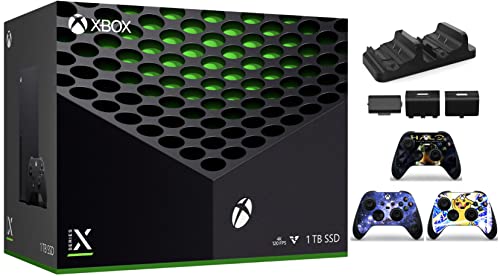 The Xbox One Series X is without question the most powerful and fastest console in the Xbox family. Xbox One Series X is the best console to play any game from any generation. The X-box Velocity architecture uses a proprietary SSD and built-in software to provide next-generation speed and performance. Thousands of games spanning all four Xbox console generations are playable thanks to Backward compatibility, with launch-optimized games among them. With Xbox Game Pass ultimate, you may download and play over 100 great games, including all new XBox Game Studios titles like Halo Infinite, on the day they are released (membership sold separately).

The new Xbox Series X is a vast improvement over the older Xbox One model. Not only is the hardware more powerful, but the overall design is sleeker and more user-friendly. One of the most exciting new features is the inclusion of a built-in 4K Blu-ray player. This means that users will be able to watch 4K movies and TV shows right on their console. Another great new feature is the ability to play games at 120 frames per second. This means that gamers will be able to experience a level of smoothness and detail that was previously not possible.

What makes Xbox Series X different from the competition?

The Xbox Series X is one of the most powerful consoles on the market and boasts some of the most impressive specs. It has a custom-designed CPU, 12GB of GDDR6 memory, and a 1TB NVME SSD. The console is also equipped with a 4K Blu-ray player and supports Dolby Atmos and HDMI 2.1. The Xbox Series X is also backward compatible with all Xbox One games and accessories.

What makes the Xbox Series X truly stand out, however, are its new features. The Xbox Series X is the first console to feature Ray Tracing, which creates realistic lighting effects and reflections in games. The console also supports Variable Rate Shading, which can improve performance by up to 30%. The

How does Xbox Series X compare to the PS5?

The Xbox Series X is the latest gaming console from Microsoft. It is the most powerful Xbox ever made and boasts a number of new features and specifications. One of the most notable new features is the inclusion of a 4K Blu-ray drive. This allows gamers to enjoy their favorite games in stunning 4K resolution. The Xbox Series X also features a new AMD Zen 2 processor and 12 GB of GDDR6 memory. This gives the console a significant boost in performance over its predecessor, the Xbox One X. In terms of storage, the Xbox Series X comes with a 1 TB NVME SSD. This is twice the size of the PS5’s internal storage and should be enough for most gamers. The Xbox Series X also has support for ray tracing

The specifications of Xbox Series X

The new Xbox Series X is a truly next-generation console, with specifications that blow the competition out of the water. It features a 12 teraflop GPU, making it the most powerful console ever made. It also has a custom-designed CPU that is four times faster than the current top-of-the-line Xbox One X. The new console also comes with 16GB of GDDR6 RAM, and a 1TB NVME SSD. The end result is a console that is not only more powerful than anything else on the market, but also faster and more responsive. With all of this power, the Xbox Series X is able to provide true 4K gaming at 60 FPS, with some games even running at up to 120 FPS

What are the specs of the new Xbox?

The new Xbox Series X is a powerful console with many new features. Its specs include a CPU of 8x Cores @ 3.8 GHz (3.66 GHz with SMT) and a GPU of 12 TFLOPS, 52 CUs @ 1.825 GHz. The new console also has 16 GB of GDDR6 memory and 1 TB of storage. The Series X is also four times as powerful as the Xbox One X and is compatible with all Xbox One games and accessories. The new console also has a new design, an improved controller, and a new Quick Resume feature. Quick Resume lets you pick up where you left off in multiple games without having to go through the loading screen again. The Series X also has a new

How much will the new Xbox cost?

The new Xbox Series X is set to release in November 2020 and will cost $499. The console is said to be four times as powerful as the Xbox One X and will support ray tracing, 8K resolution, and 120fps gameplay. The console is also equipped with a 1TB SSD which will make load times shorter.

The new Xbox Series X is a powerful console that has some impressive features. One of the most notable features is the 4K Blu-ray drive, which allows you to watch movies in 4K resolution. The console also has a 1TB hard drive, which is double the size of the previous Xbox One. The new Xbox also has a faster processor, which allows for better gaming performance. Overall, the new Xbox is a great console that has a lot to offer.

The new Xbox Series X is a sight to behold. It’s sleek, powerful, and packed with new features that are sure to impress. The console itself is smaller than the original Xbox One, but don’t let its size fool you – it’s packed with enough power to run games at 8K resolution (especially on this LG monitor) and 60 frames per second. The new controller is also a marked improvement, with a textured grip and triggers that provide haptic feedback. Perhaps the most exciting new feature, though, is the ability to play games from your existing Xbox One library. That’s right – your old games will work on the new console, thanks to the power of backward compatibility.